The alarm went off early, it was still dark out, but I could hear cars on the road outside and it sounded wet, not a great start, but not a surprise either. After forcing some porridge and coffee in, we headed down to the start. My biggest worry in the run up to the Maratona was the sheer amount of people, more than 9,000! As we were shepherded into our pens, my sense of unease was growing, how were this amount of people going to fit on the road? Would someone knock me off? Would there be a crash? I wasn’t sure if I wanted to be sick, cry or run away and as always my partner-in-crime had the best response:

“you’re stuck here, you can’t runaway, save your tears till the end, so be sick if you want!”

Luckily I kept my breakfast down but the atmosphere was overwhelming, helicopters flying overhead, a priest giving a blessing on the big speaker, and the intangible sense of nerves from the people lined up next to me. Finally the cannon sounded and we started moving.

There was a short run into the first climb the Passo Campolongo, and I was surprised that it was OK, it was stressful, but OK. I had a small pocket of road, and I headed upwards. My pacing was steady as I knew there was a long way to go, and it was so busy finding spaces would have meant more aggressive riding and wasting energy! 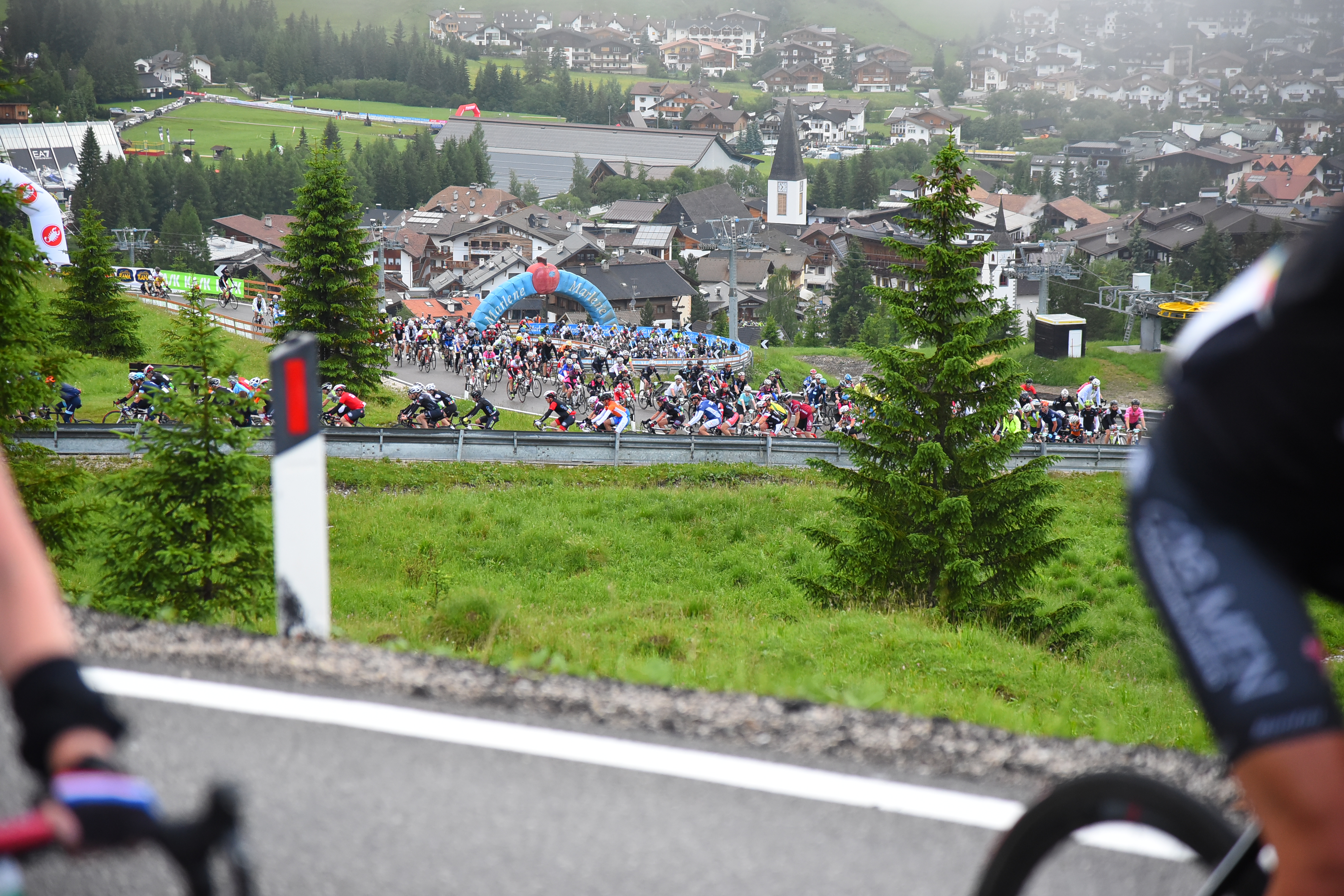 As we wound on towards the Passo Pordoi it was noticeably thinning out, and I finally got chance to have a clear and fast descent, this let me have a moment to take stock of how I felt, to look at the surroundings and prepare myself for the next time up the Campolongo and onwards to the dreaded Passo Giau (10km at 9.3% *gulp*). I was feeling OK, I had been very conservative in my efforts (learning from Mallorca where I went full gas all the way!), I was struggling to eat though, I felt very bloated and was having trouble swallowing solid items. Luckily I always make sure I have carb drink in my bottle at events, so I knew I was getting some energy to keep going. The second time up the Campolongo was much better, the road was clear and I had a good trip up it, followed by a really long descent towards the Giau, plenty of time to worry about what laid ahead. 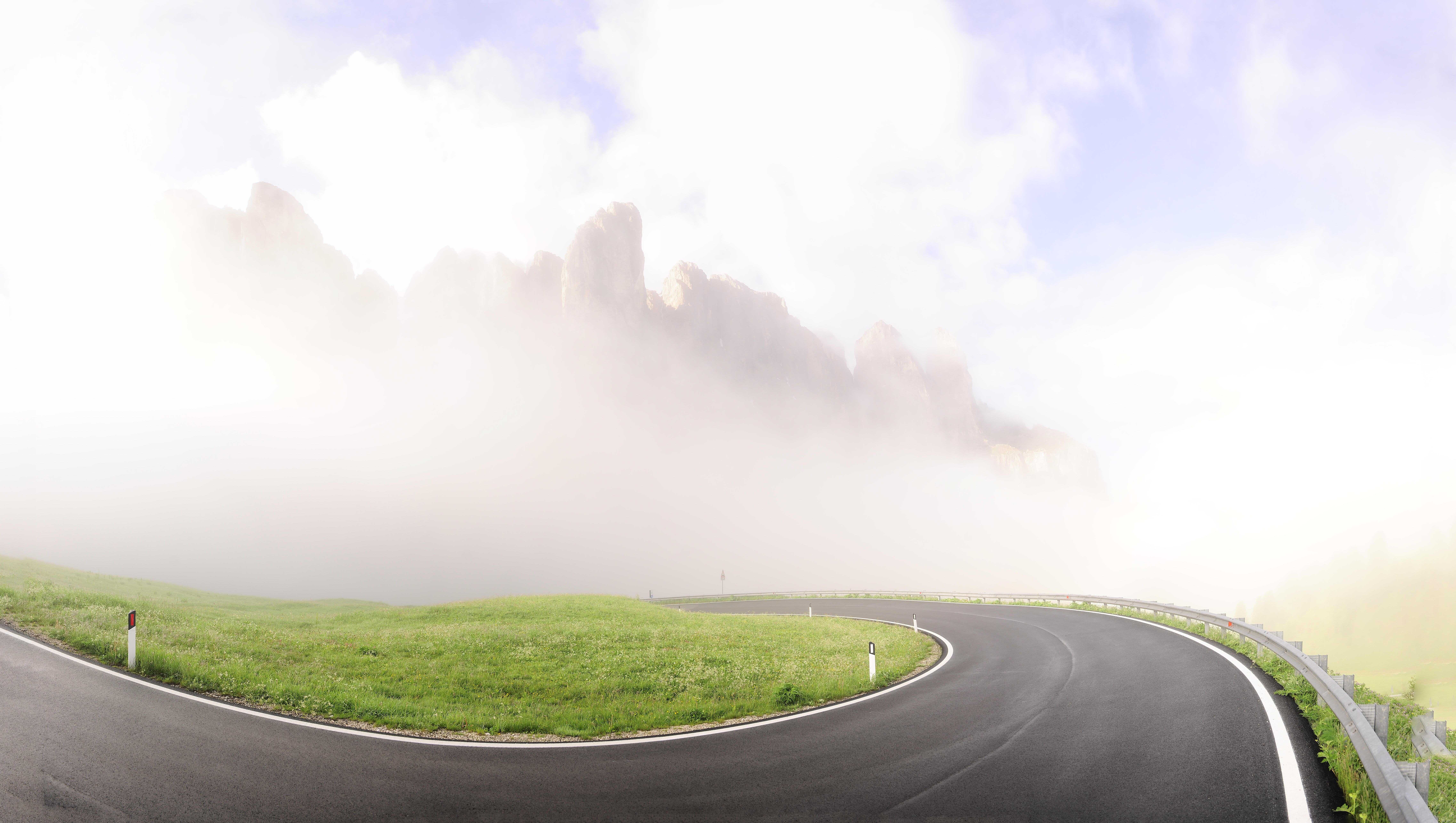 Cycling in the clouds

It had been a cool day, mostly in the clouds, but when I turned onto the Giau the sun came out in full force. I had a small game plan in place, which was mainly to have small 10 second stops to get my HR back under control when needs be. I’ll be honest here, I was REALLY worried about the Giau, yes I done plenty of Alpine climbs, but never something as consistently steep as this. Once this climb starts the gradient doesn’t really change, and it was a bit of shock to the system. The small bridges over the river offered a brief respite to the gradient and the tunnels gave some shelter from the sun, but really there was no where to hide. I split the climb up into how many hairpins or ‘Tornati’ there were, ticking them off corner by corner. I also allowed myself a brief stop every 20mins, but towards the top, these became more frequent. Once I could see the top I did become a bit frustrated as I didn’t feel I was getting any nearer, I had to turn my brain off and carry on.

Once I was finally at the top a guy shoved his phone in my face and asked to take a picture, I was panting and trying to sort myself out, find some emergency chamios cream, and this guy wants a picture?!! Grudgingly I took his picture!!! I made a bit of a mistake at the top of the Giau, I should have eaten more, but I had convinced myself that I was on the way home, and would be ok. It was pretty wrong!!

The descent of the Giau was incredible, plenty of room, hardly any other people about, I cruised down, enjoying my fresh chamios cream and piece of banana I’d picked up. Then, the almighty shock to the system (although, if I’d looked at the profile it wouldn’t have been such a shock) the Passo Falzergo what a bugger! It wasn’t very steep, but boy did that climb keep going, it nearly broke me mentally! The bottom section was a false flat and I beasted it, but then it just carried on, getting incrementally steeper and making you feel like you were getting slower and slower all the time, there was 10km of this before I crossed the timing mat and turned the corner, thinking I was about to descend into La Villa. But no, it had a sting in the tail, after turning the corner the climb carried on, and on. I had a stop here and gave myself a stern talking to, in hindsight, I was running out of fuel and should have had a bite to eat, but pig headedness took over and I convinced myself I was nearly home, so no point in eating (silly). 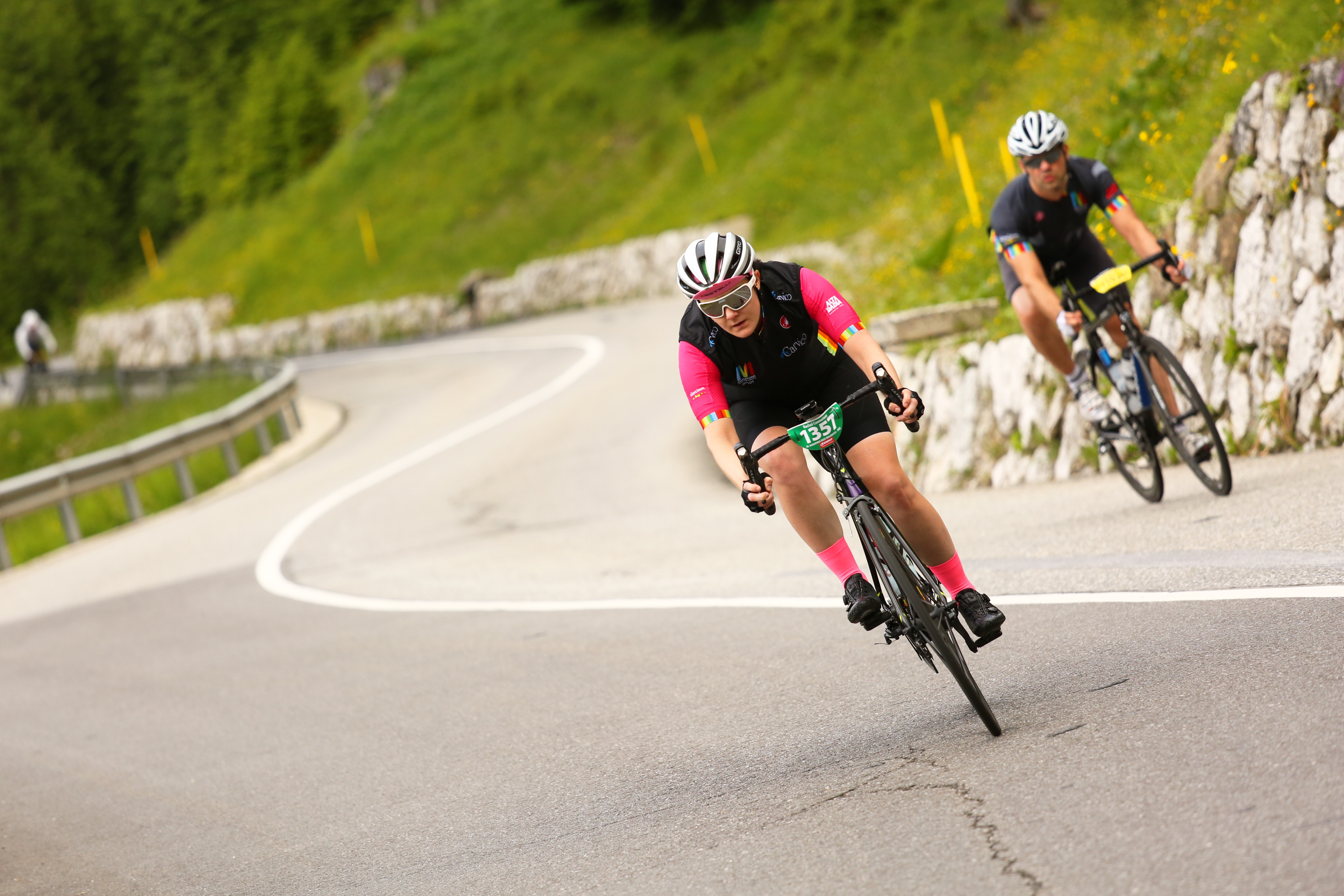 On the descent the usual water works started, I’m sure it’s relief that I’ve done the worst of the day, but I do need to work on keeping my emotions in check, I got some funny looks as I was sobbing down the hill, shouting at myself to stop! Only one thing left, the Mur Dl Giat. The awful 19% side street. Now, steep hills have never been my forte and today was no different, I managed a fair chunk before getting off and walking, my brain wasn’t functioning well at all here, and I’m at bit cross with myself for not giving it a better go.

Then it was just the run in to Corvara, where the other girls were waiting! They shouted over as I crossed the line, and I was a bit overcome that I’d got round, in a respectable time too. I know I could have gone quicker, but I had a brilliant day and was the most amazing event I’ve ever done. I loved it, and I will definitely be going back in the future. 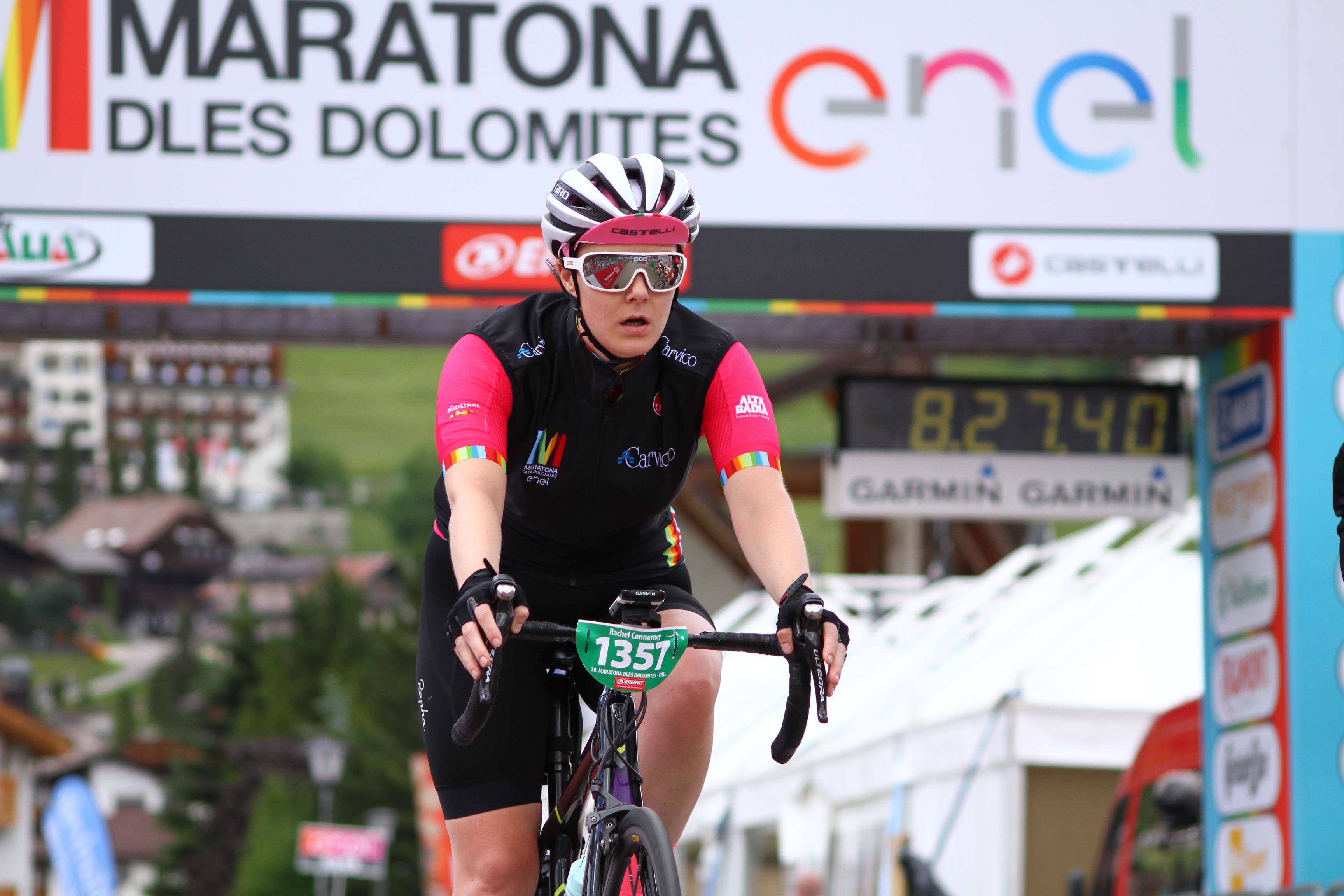 It had also been brilliant cycling with a fantastic bunch of ladies, who all did amazingly well, I left feeling very lucky I have such wonderful women to cycle with who push you to do incredible things. The coach trip back to the airport was chock full of talk about ‘where next’.