You know that feeling when you enter an event and don’t realise how hard it’s going to be? Yup, me too. At 110km and an official ascent of 2,900m it would be easy not to treat this event with the respect it deserves. Covering two of the highest passes in Switzerland and Europe and a unique cobbled climb the Gran Fondo San Gottardo certainly has a lot to offer. But the way the event was run and timed, the climbing actually came out nearer to 4,000m in 110km that is a tough old day out! We had entered the Gran Fondo as a last check of our legs before we head to Nice the following week, but the event became something of a challenge for me.

The weather was looking changeable when we arrived for sign on, and there was much debate over the dinner table about what exactly to wear, with temperatures down to 5 degrees on the top of some of the passes but valley temperatures exceeding 20 degrees we knew our pockets would be full of extra clothes. The event HQ was an old airfield in the Italian speaking area of Switzerland, a brilliant setting with the mountains towering over head.

Nerves kicked in early for me, I had thought all the recent racing and time trialling I had been doing would take the edge off this, but there I was worrying about how big those mountains were! I had my 5 minutes of fame on the start line as the MC interviewed me at the start!! Surprising how shy I got with a microphone in front of me! Then we were off, racing towards the first climb of the day. The San Gottardo old road, over 12km and more than 7% in gradient, with short sections of cobbles in the first half, leading to the full cobbled section after 5km. 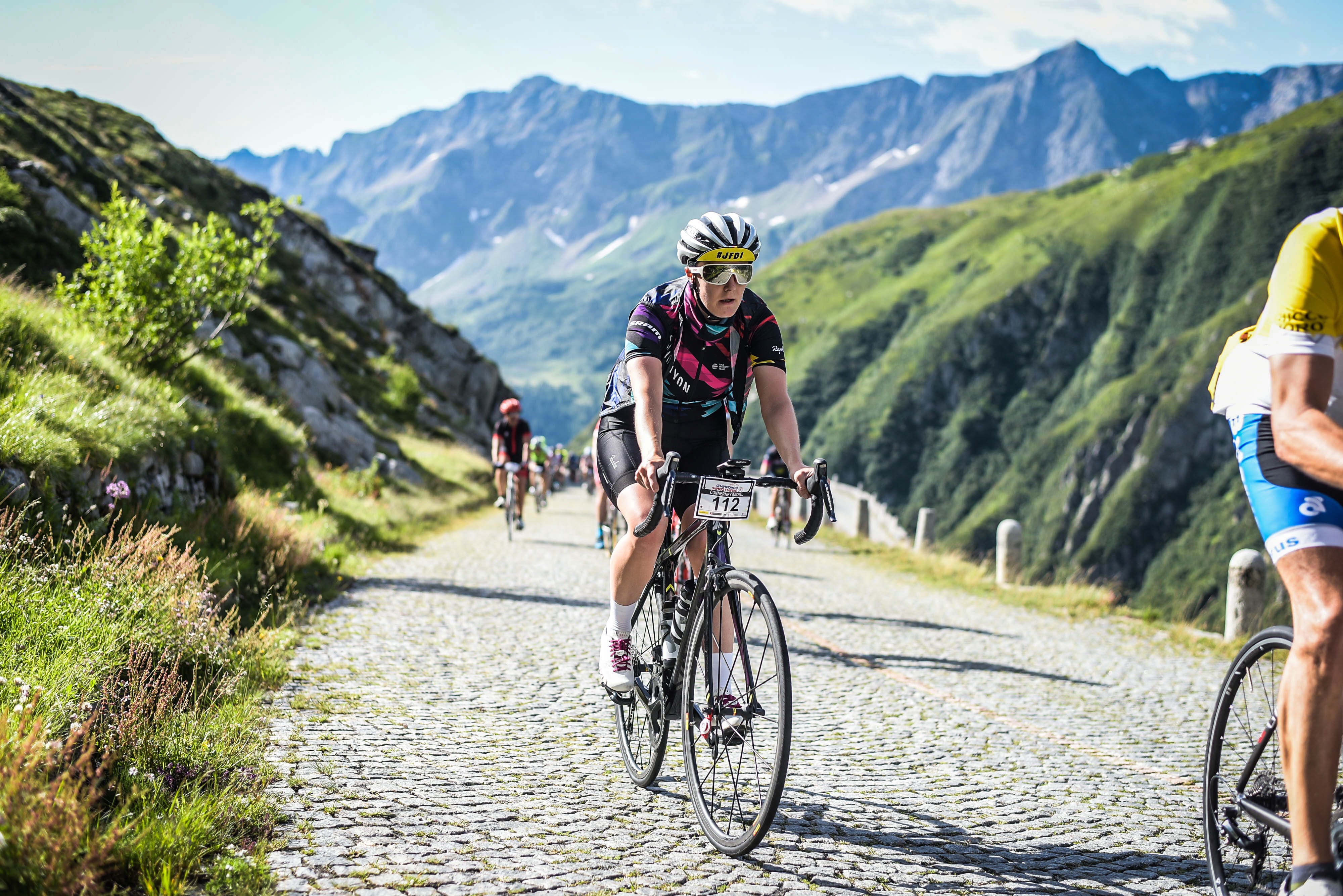 My heart rate was through the roof with nerves, and I knew I had to try and control it, otherwise I would wear myself out on the first climb. The sun shone, and I was quickly stripping off layers. When the first cobbled section hit I was prepared and I relaxed into them, trying to keep my cadence high, but we were soon back on the tarmac, which made you want to accelerate! I didn’t get too carried away though, knowing what was in store. 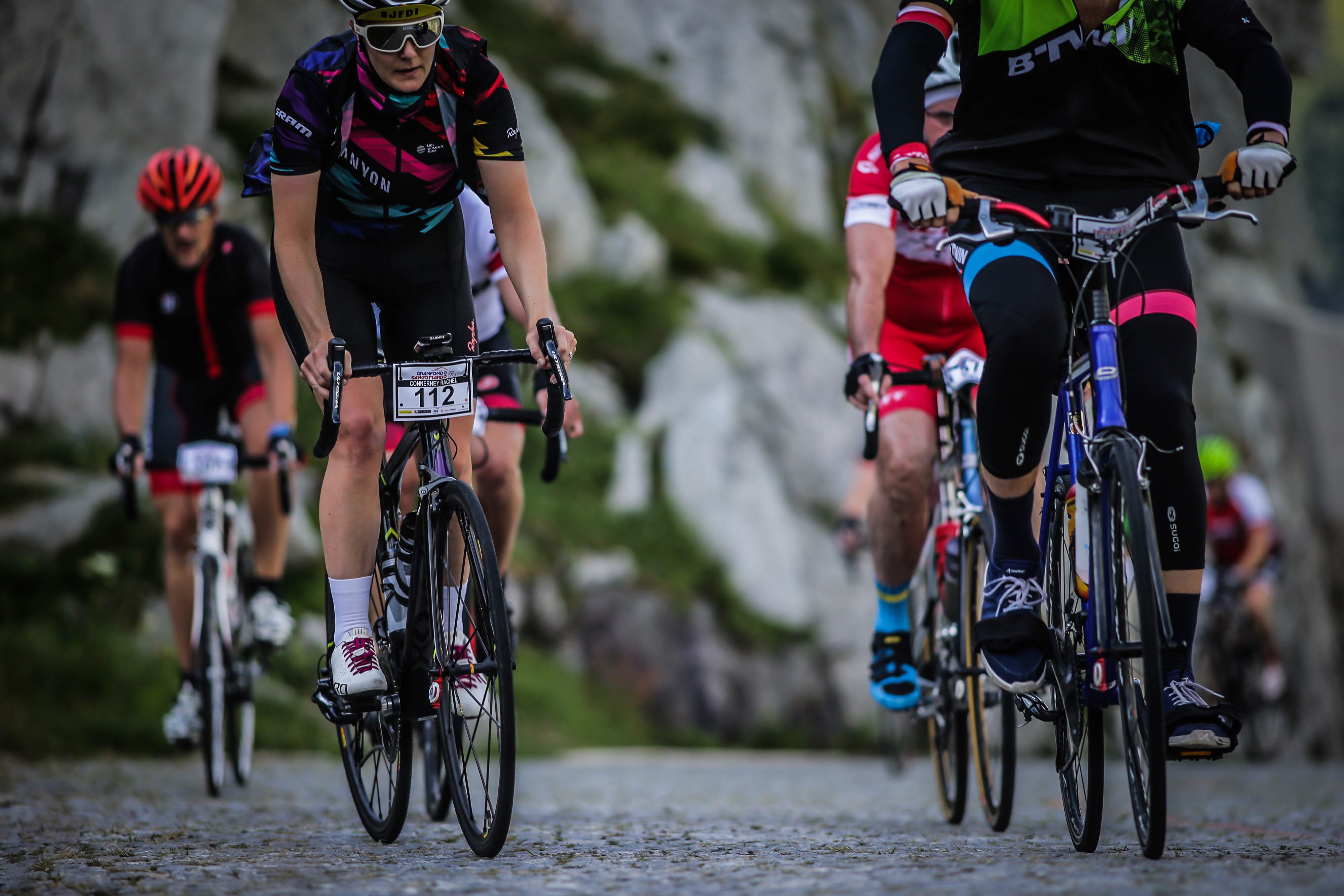 Once we reached the top half of the climb there was no let up from the cobbles, and my back and bum started to hurt, luckily the cobbles were dry and had plenty of grip so it was possible to stand up for a couple of revolutions, but drinking on the cobbles proved very difficult! I managed to find a good rhythm on the cobbles and aside from the pain of them I found myself enjoying it. However, my first comment at the top of the climb was “I’m not bloody doing the Tour of Flanders”! 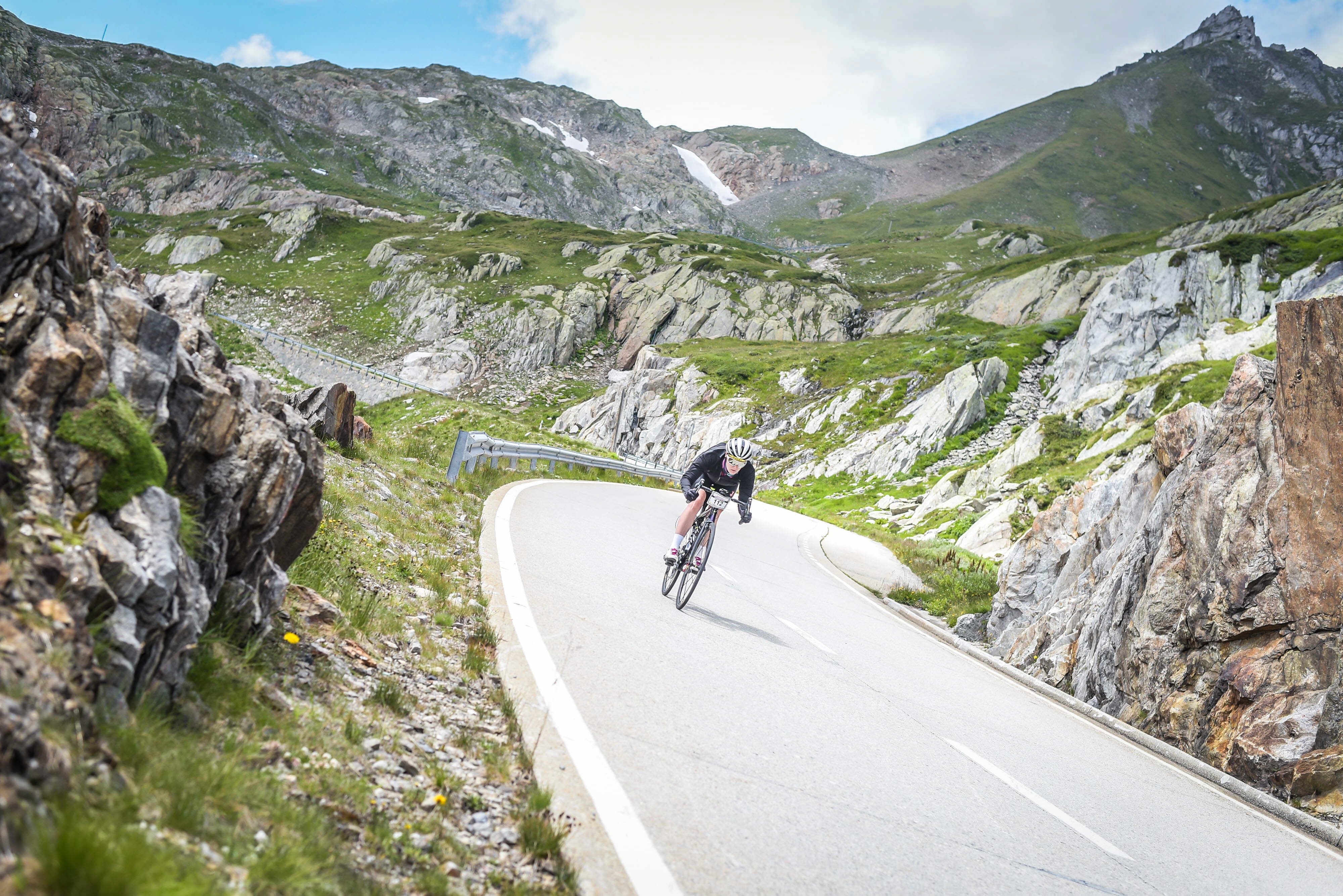 Even wrapped up it was cold descending, but the road became wide and I found myself relaxing into the descent, as always though it was soon over and the climbing began again on the Furka Pass made famous by James Bond in Goldfinger. Similar to the San Gottardo at 11.5% and over 7% in gradient, but these stats don’t do the Furka justice – it was hard, and long, oh and did I mention hard?! I was not happy, the cobbles had exacerbated the usual climbing aches and pains for me and it became somewhat of a slog to the top. This was followed by a very long and cold descent, even wrapped up, I got cold and my knees began to suffer. But I knew I was on the way to the final climb, the big one, the Neufenen Pass, or as we had begun to call it, the Neurofen Pass! 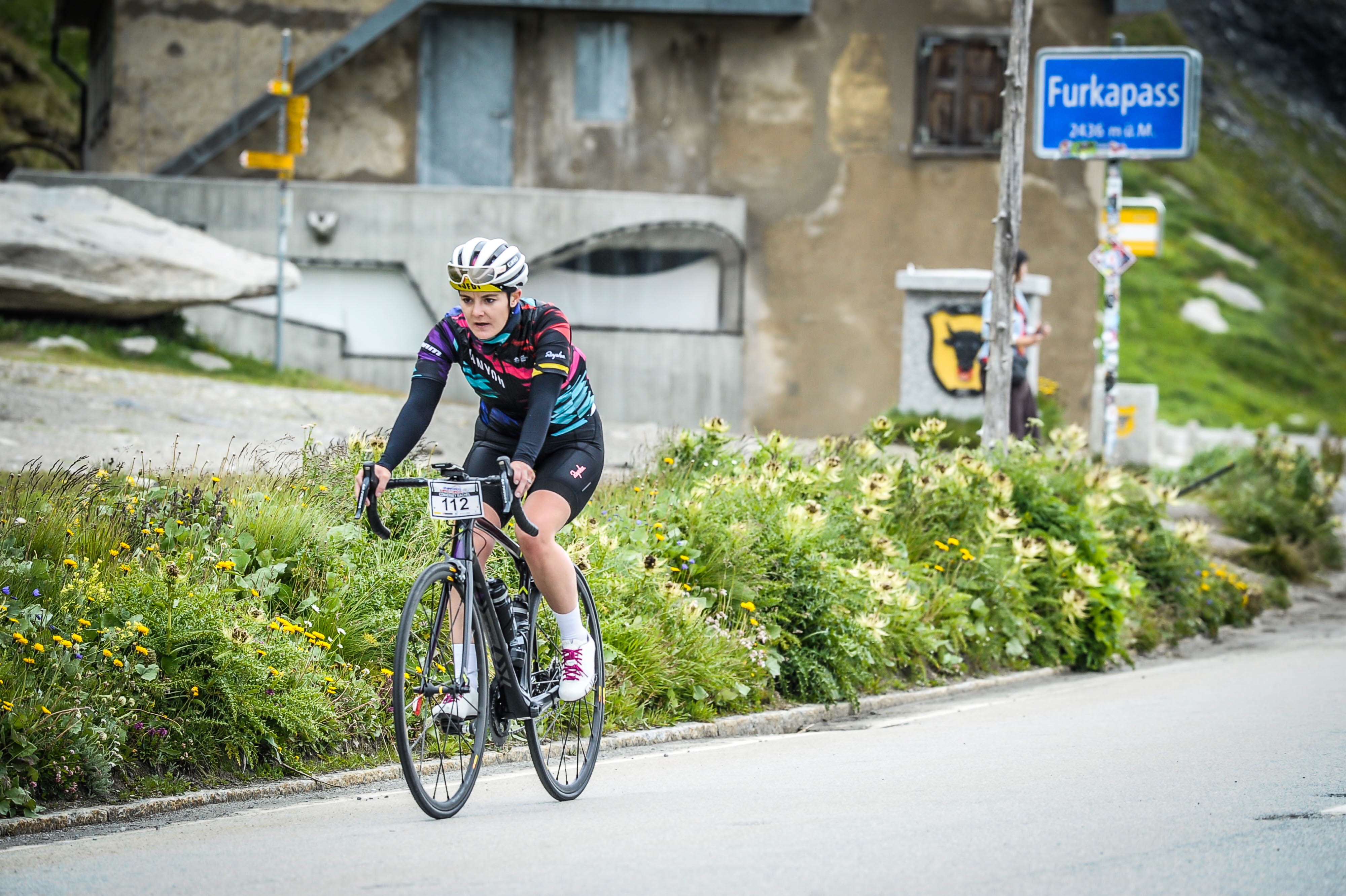 We’d driven up the Neufenen on the way to the start, so we’d had a good look and what was in store, but it certainly gave a false impression that’s for sure. Although the average gradient is 8.6% most of the climb was an unrelenting 10%, it just never eased. By this point I was crawling along and worrying it was going to take 2 hours to climb this beast, it really seemed never ending. But sure enough the top came and just left the 30km downhill run back to the finish, what a way to finish an event! 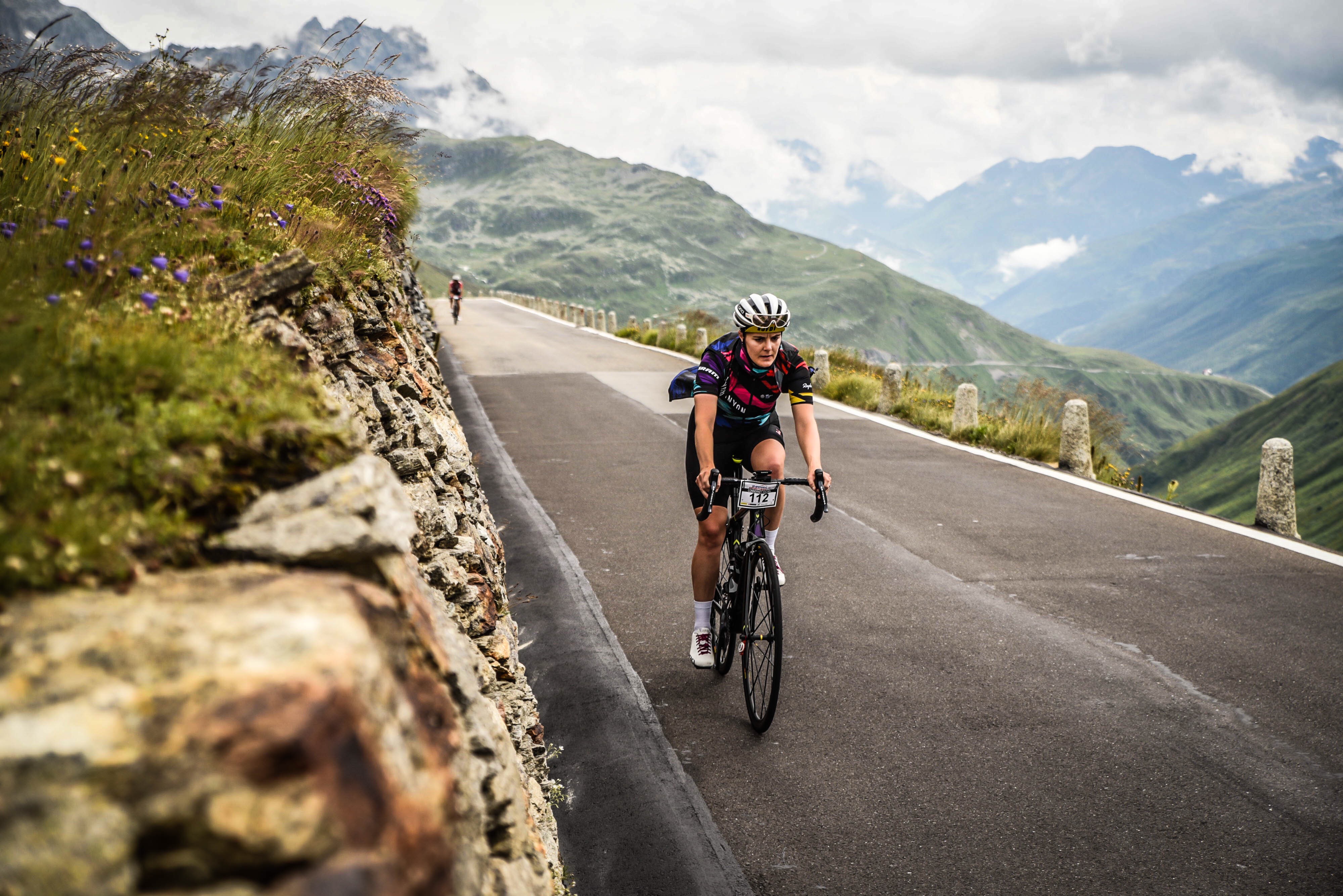 This was an event not to be taken lightly, it may be short but it was seriously tough, but it was a fantastic place to cycle and wouldn’t hesistate to recommend the area and the people. 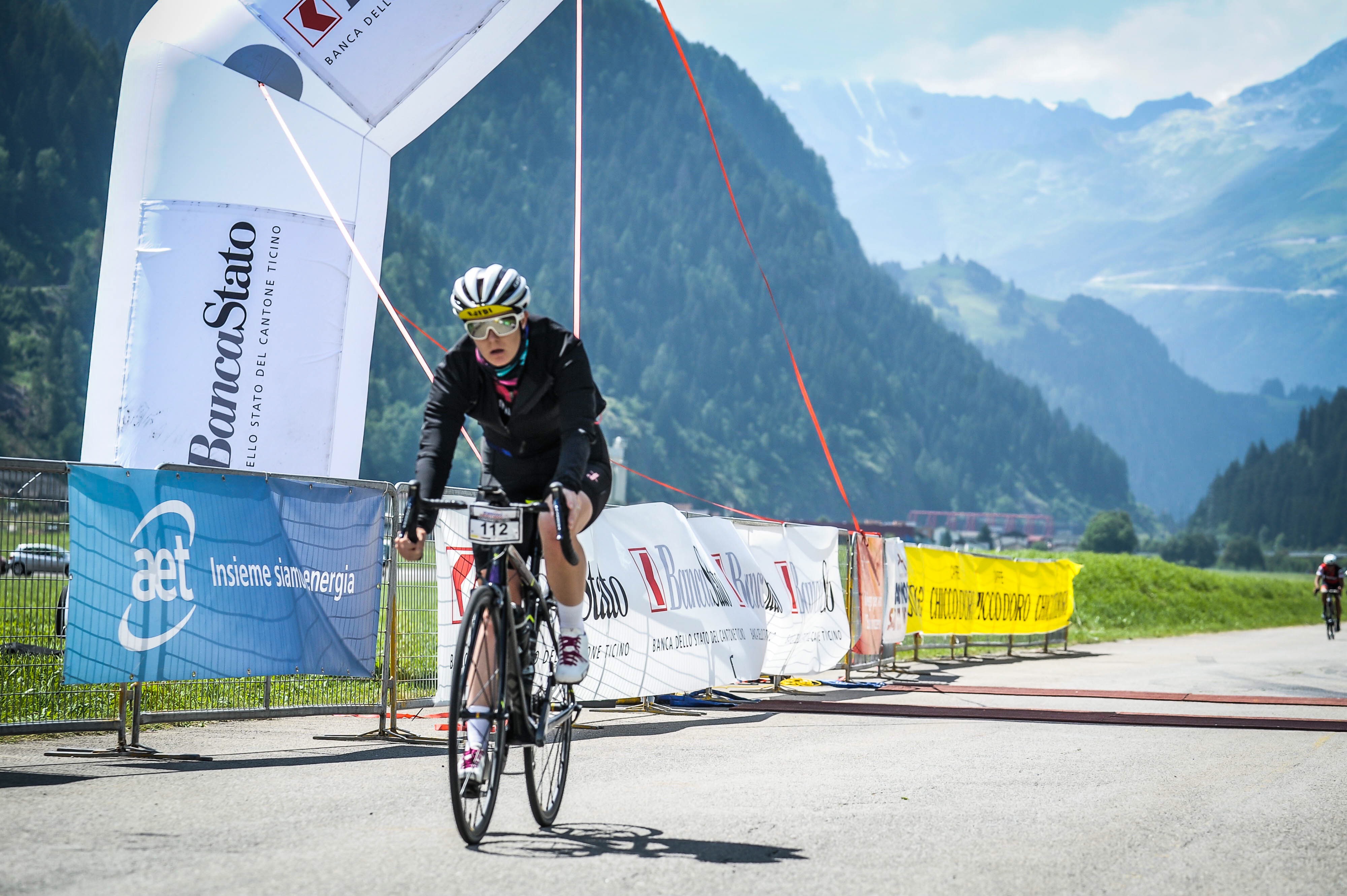