So the summer filled with adventure was rapidly drawing to a close, but there was one last BIG race to complete, the Gran Fondo World Championships. Safe to say I was nervous. I’d spent a year getting dropped in races, and was convinced that was all that was going to happen again.

After 10 days of final preparation which consisted of easy days pedalling to Chez Mazzimo for a coffee interspersed with long sprints and a lot of stressing about tactics and things I couldn’t control, the time came. 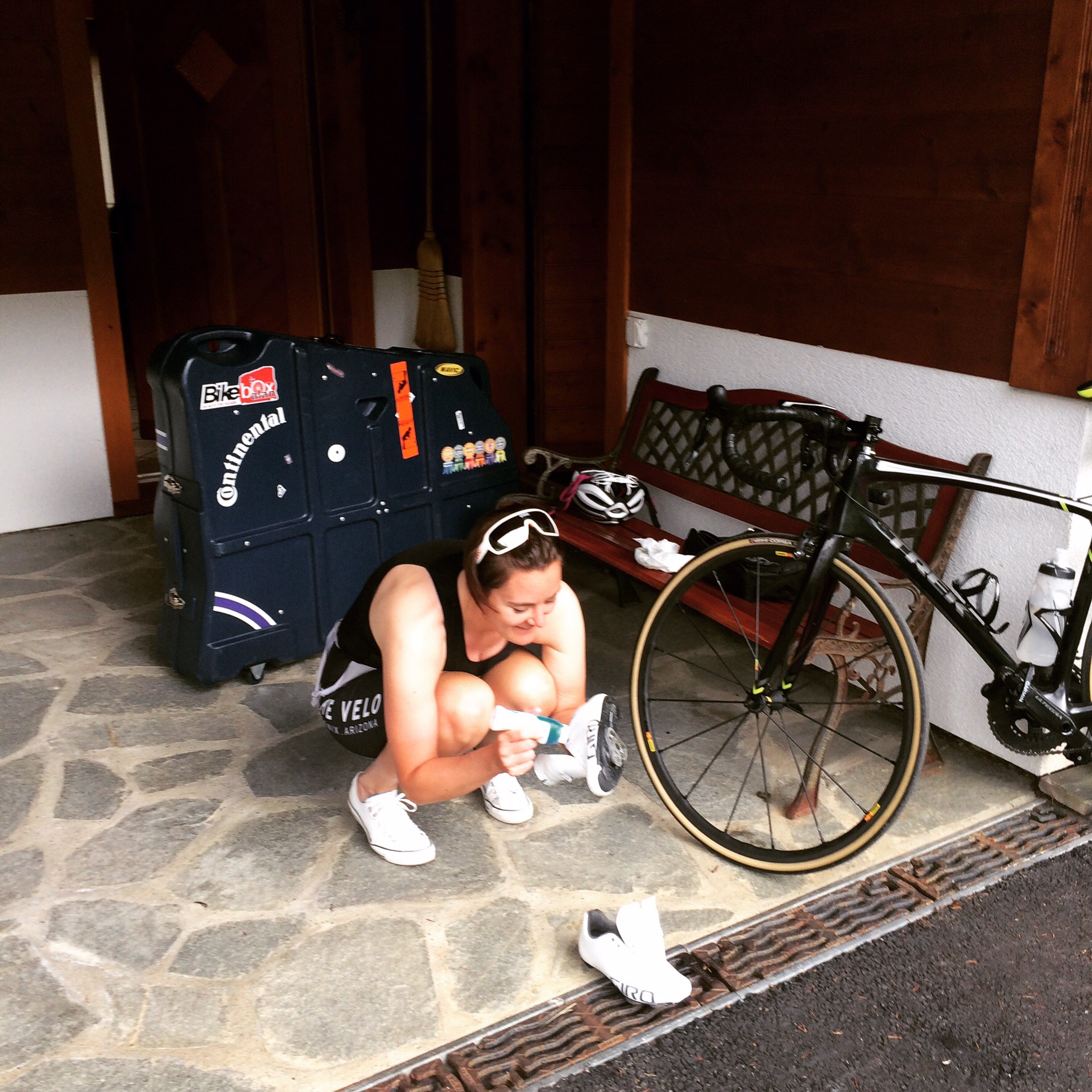 The benefit of how hot it had been in France was that I was fairly well acclimatised to the heat, but still, it was hot. After a nervous night’s sleep, I met up with some of the guys from my club and made some friends in the hotel and off we went to recce the start and finish. The start was very involved with lots of French road furniture and a few sharp bends thrown in for good measure, the biggest worry however, was how bad my legs felt. Sluggish, heavy, just downright tired and not up for this challenge at all. Great. I tried to tell myself it was just the travel day and it wouldn’t matter once I was racing.

The food in Albi wasn’t great and my evening meal was left pretty much untouched, I wish I’d had porridge in my room instead! Don’t get me wrong, these aren’t excuses, but I did arrive somewhat tired and underfed.

Regardless of the small problems, the morning still came around and I pulled on my Team GB kit which felt amazing even with all my nerves and off I went to the start. And then welcome to chaos, there was no organisation, thousands of people crammed into the old part of Albi with no order at all. When my race category was finally called forward, I had to fight my way through, when I looked around I realised I was at the back. Crap. That was not the plan. Then, we were racing, well under a neutralised start anyway.

The start was quick, but the neutralised start held it together, and the hairy start was negotiated safely, thankful of the smaller peleton size compared to some of the men’s age categories. When we were finally under orders the pack held together for a good while until a steep right hander uphill which split the group. 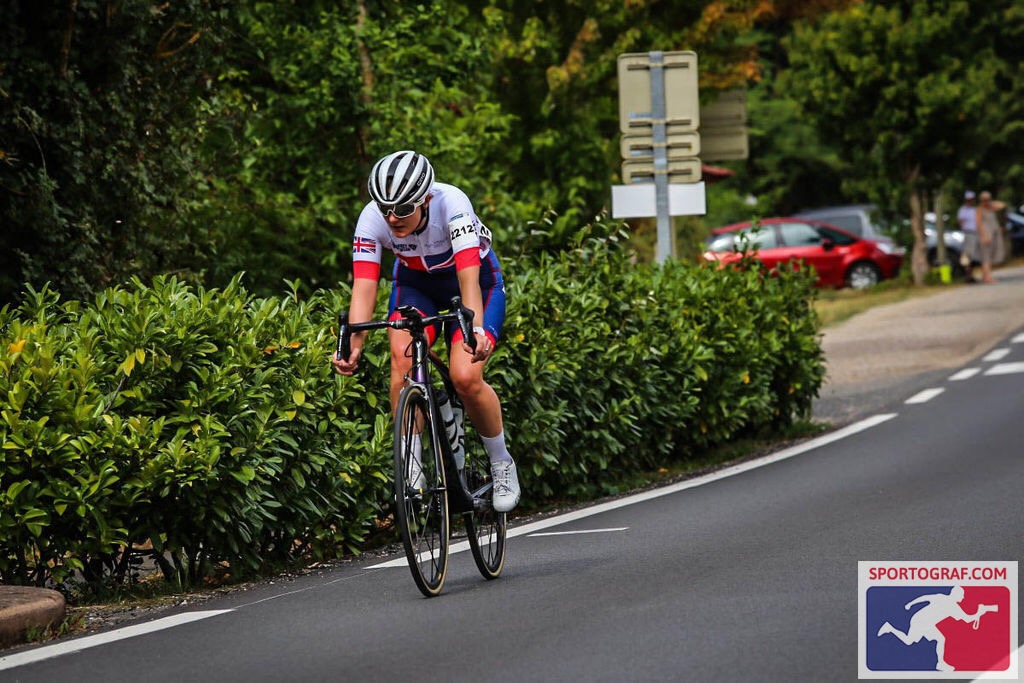 So, second group on the road, I was happy with that, my main goal was to stay with the main pack for as long as possible, but second group on the road, I’ll take that. We worked well together in a tight group, picking people up on our way. The first feed zone came and went and I didn’t need to put into practice my bidon grab. Then onto the first and main climb of the day, we hit the bottom fast. In past races I’ve blown here and not managed to stay with the group, but not today! I looked around and I was climbing in the group! I was breathing hard, but not close to blowing up, I was climbing in the group!

I stayed with this group until the second feed station, where I did need some water, and managed a perfect hand off! However, a fast group from behind came through and blew our small group apart, suddenly it was every (wo)man for themselves. Absolutely gutted. Soon after this I got a good wack of cramp in my calves, something I never suffer from, until today that is. My body had raced its socks off for 70km but now, it had had enough! I settled into just getting home. 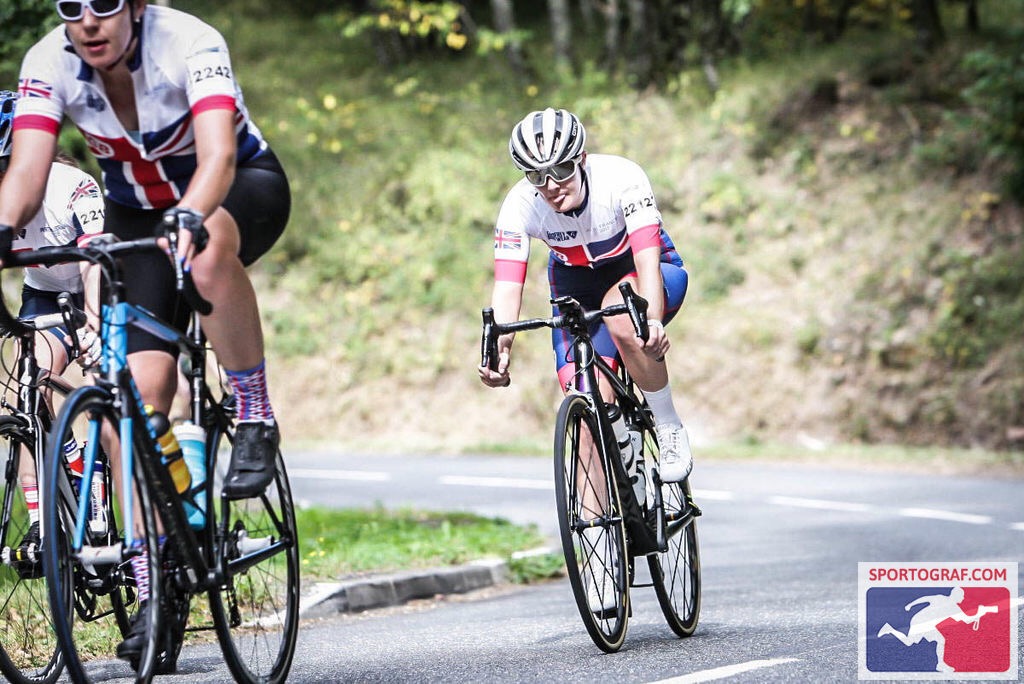 After a bad 15km I found a bit of rhythm again, but not enough to pick up any of the fast groups coming through from behind. With 10km to go I picked up an Australian girl and we worked a bit together, but I ended up doing the lion’s share of the work. We turned onto the motor circuit and with 100m to go the Aussi past me shouting ‘sprint! Sprint!’ but I had nothing left, I couldn’t even get out of the saddle. I was breathing hard, just to get to the finish line, but it made me so cross that I towed her to the line (that’s racing, I know!), I gave myself a panic attack – not how I wanted my race to end! But she waited and gave me a hug, and I composed myself!

Cramp and a panic attack, safe to say I’d pushed myself hard. Immediately after I told anyone who would listen how much I hated it and won’t be doing it again. But after a few days to have a good reflect I was pleased with how I had done, I was up against the best girls in the world, and I had held my own for 70km! After the summer, I had I couldn’t have been more pleased.

I hadn’t let myself down, and that was my main concern, I didn’t want to finish with any regrets of not hanging on to groups, but all those damn sprint training had really paid off. After saying I was never racing again, I was slowly coming around to the idea that as long as it wasn’t a circuit race I was up for more racing in 2018!

Albi was an amazing experience, with great Team GB camaraderie!