Ever wondered what goes into training and racing a stage race? How much food do you eat? Or just WHY?!

The journey to the start of the stage race began 3 months ago, with long slow base miles. These zone two endurance rides would become a large part of my weekly training. While these rides can be seen as boring, they are vital to the success of an endurance athlete.  One way I managed the boredom on these rides was with audiobooks, quiet enough to hear the traffic and surroundings, but immersive enough to entertain on a 4-hour ride. Through the three months I got through all 7 Harry Potter books and countless podcasts. Maybe I should use my time more wisely and learn a new language in the run up to the next event!

Alongside all the endurance hours were many hours on the watt bike and in the gym, working on my core strength and power. I try to keep my strength sessions interesting, incorporating different body weight exercise which test balance and coordination, vital for a MTB rider. The Cheshire Mavericks helped massively when I was getting lonely, especially being able to go out on the MTB with a great group of riders.

My food based motto was ‘always be snacking’ and this started a few days before the race began. I upped the carbohydrates I was eating, my new favourite meal became 5pm porridge. While the rest of my family enjoyed a beer as the sun set over the volcanoes, I was tucking into a bowl of porridge, banana and peanut butter. I tried to eat carbohydrate based whole foods, I also avoided meat during racing as it can take your body up to 48 hours to digest. While, as a standard rule I believe in eating the rainbow (though sadly not a Skittles based diet), keeping up the fruit and veg based diet took a bit of a back seat to the carb centric intake!

All the training miles done, the bike working perfectly, 2020 team kit arrived, I was ready to go. I was the strongest, fittest and healthiest I’ve ever been. I arrived in Lanzarote early as I knew I would need some time to get used to the terrain, the loose and sandy trails were quite different from the mud of the UK! I grew in confidence as the week went on, although I was still nervous on the deep sandy corners. I was ready as I ever would be.

Having never ridden a MTB stage race I was unsure how to pace day one, I was definitely nervous and my very basic plan was to follow the wheels for as long as I could without digging a hole I couldn’t recover from. All the race categories (excluding the pro men and women) started together, and it was absolute mayhem, but I held my nerve and my line and went for it! 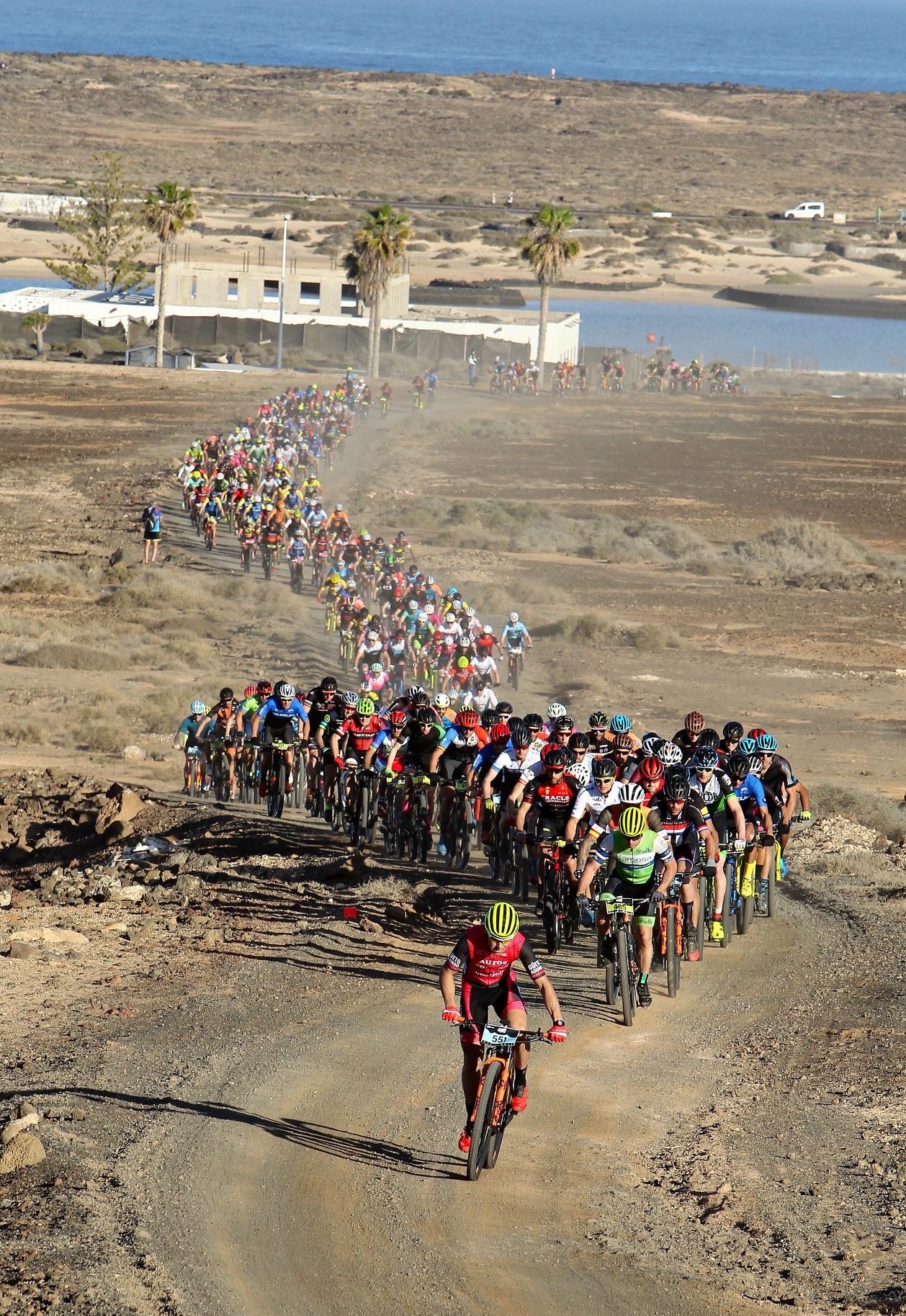 Chaos of the Mass Start – I’m in there somewhere!

The first part of the single track arrived and it became a free for all with a queue of riders waiting for their turn. After a while the race thinned out and I kept pushing the pace wherever possible. The women’s field was incredibly strong and GC was tight with it all to play for.

Day two was actually quicker than the first day. I came into my own on the last 20km, catching rider after rider on the run for home. I’ve never felt so strong and so in control and as a result I gained another place on GC. Clearly my strategy of a gel every 30 minutes and electrolytes in my bottle was working well. 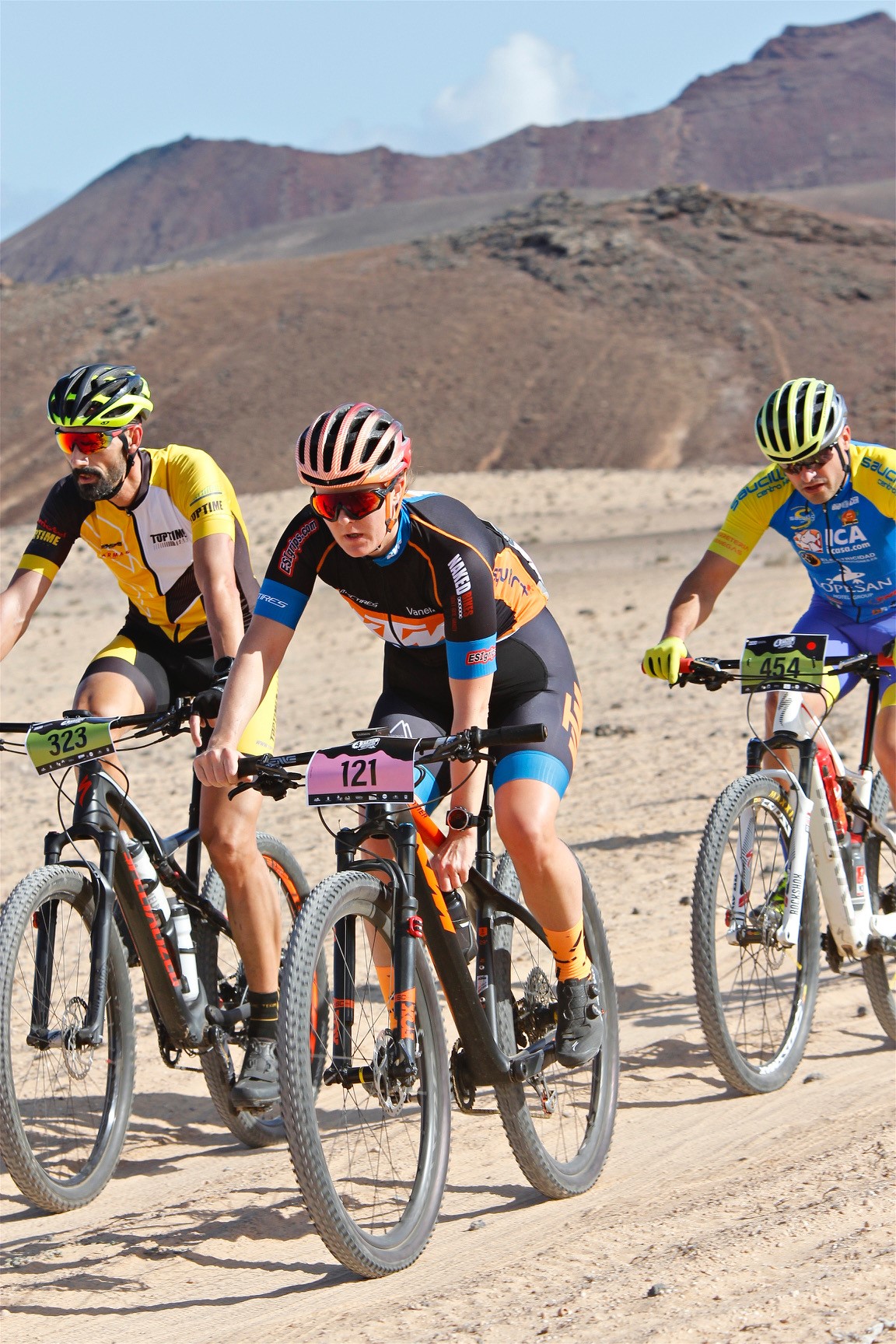 Always Be Snacking (and Drinking!)

Day three saw the time trial arrive, the uphill effort also included a fairly technical single-track section, which I had pre ridden in the previous week. TT day should have meant a lie in, but my stomach had others ideas, I was hungry down to my toes! Three breakfasts later (waffles, porridge, eggy bread) I was a new woman. My aim was to go ‘easier’ for the first third, get through the technical section and then push everything I had for home. On the whole I stuck to this, gaining some new power records as a result. The intensity of the TT took its toll in weird ways, and I was struggling to get any food down. It seemed my body had given up digesting anything. I felt positively sick for the whole evening, whilst still making sure I got my porridge for pudding down.

The final XL day came and I was certainly nervous, where we’d be climbing to the highest point on the island. My plan was simple – steady for the whole day, then if I had anything left push the pace on the final climb. Wow, the pace was high at the start, I was conservative and didn’t panic when the main group shot off ahead. I kept my pace steady, kept eating, kept drinking and hoped I’d reel them in later in the day. It was slow going in places with deep sand pits that even had the pros pushing their bikes. With 40km I caught the girl ahead of me in GC and never looked back. 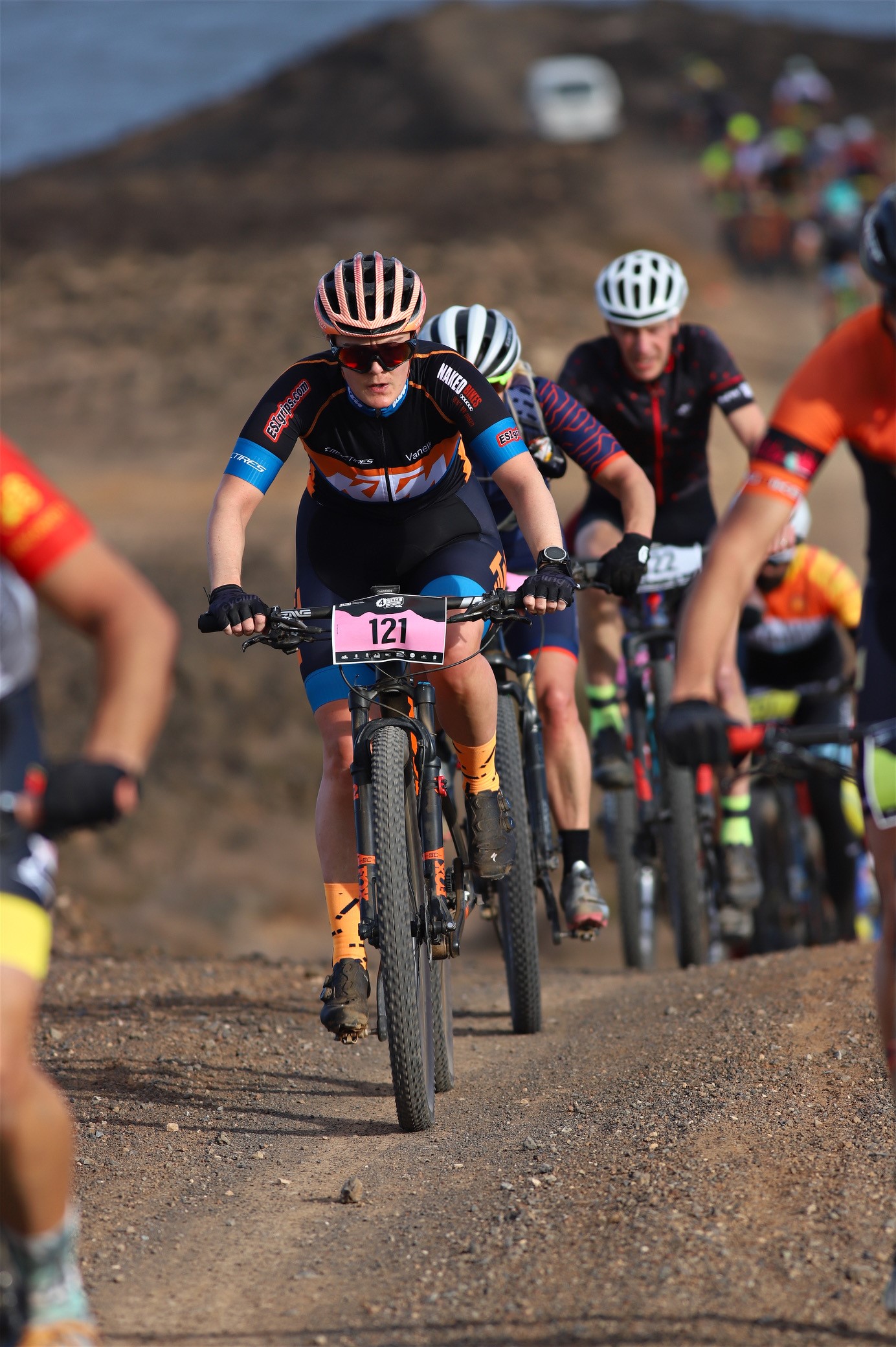 Finishing strong was an amazing feeling and worth all the hard work. I levelled up as a MTB rider, with my skills and confidence improving throughout. My main takeaways from stage racing are:

Keep eating – I’ve never eaten so much on or off the bike (no junk, whole food only) but equally I’ve never performed so well or so consistently.

Zone 2 works – yes it might not fun or exciting but alongside being fit and strong I could keep it going all day when people around me were cracking.

It’s not just about the bike – it was as important to have a strong body to cope with the rigours of riding day after day, all the planking and weights at the gym helped keep me resilient.